We work with talented authors and avid fans to spin new and immersive stories within the universes of our games. Join us in supporting these authors who have invited us all on new adventures that help us see the worlds for more than what they are in the game, through new eyes, new characters, and new creations.

No Legacy Between the Stars by Brett Caron

Empty space can kill you as surely as what careens in waves or particles through its uncaring vacuum. There are two kinds of spacers – those who fear the void, and the dead. Rolee knows which one she is. First officer to a star trader with a love of exploration, she tries to protect her crew and her captain from themselves and each other.

But when that love becomes obsession, taking them from sketchy spice halls to ancient ruins on a world wracked by deadly storms, that becomes harder to do. Everyone has secrets, spacers maybe more than most. Part of a first mate’s job is to keep them or share them. Rolee has never had a hard time picking between the two, but when her captain’s love turns to a dark obsession she will have to choose.

Choose between her duty and her family, her promises and her secrets. Protecting everyone around her might not be possible in an environment so hostile it seems bent on killing them with every step they take. And there’s one thing she hasn’t thought of.

Rolee has to ask herself who’s going to protect her.

Because the dangers of the void are whatever’s there – including what human beings are capable of.

It’s hard to make friends with bounty hunters. In a galaxy this harsh, this unforgiving, you never know who might pay them enough to conveniently forget that fact. Bell, a man who believes that the credits of any great House or Syndicate are as good as the other, has finally found people he trusts – Captain Daf Koryama and the crew of the Broken Record. He thought he’d left the back streets and vicious gangs of Steelcrank far behind him.

But when a ghost from his past appears, now a rival hunter with a valid warrant and hungering for revenge, it kickstarts a breakneck chase through intrastellar space and a terrifying journey into the void. Now Bell must decide what matters more – his friends, his life, or the credits?

This collaboration with our third brother, Martin Trese, offers a vividly illustrated story in our fantasy world of Steel. 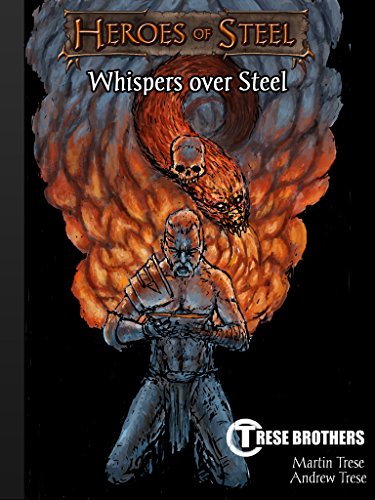 The Reclamation by Bryan Sirois

A novella adventure set within our fantasy world of Steel.

Generations of mankind have suffered, entombed deep within the world of Steel. Few living in the Underdeep have ever seen the sun, and the only knowledge of the life humanity enjoyed on the surface has been passed down by the elders. Landon, son of a renowned cartographer, has spent years searching for a way out of the gloom. Following a newly charted exploration, he finds a way upward, which takes him farther than he has ever climbed before.

At last free from the depths below, he breathes fresh air for the first time, but his euphoria is short-lived, as Landon quickly comes face to face with mankind’s most brutal enemies. Can he survive in this undiscovered world, where darkness and evil thrive under the light of the forgotten sun?

Set in an original cyberpunk and sci-fi world, Cerberus was written by one of our great fans and friends of the Trese Brothers, J.Y. Calcano.

The Nano-War has left the world a toxic wasteland.
Monstrous creatures roam the land. Humanity exists under
titanic domed cities loosely connected by an underground network
of tunnels.

There is no civil authority. Corporations rule their megablocks
like city-states alongside powerful tribal gangs and worse.

And Humanity’s secret weapon against the genocidal Simulants wants
to be free… at any cost. Humanity be damned.

The lies have been told.
The players picked.
The shockguns loaded.

Let there be WAR.